Tofurkey isn’t your only option for a holiday feast, friend! There are so many delicious, flavorful Thanksgiving vegan dishes you can make. Even your omnivore friends will drool over them!

I’ve put together a list of my favorite vegan Thanksgiving menu ideas to help make your holiday a total dream.

So this year, let’s prove once and for all that a vegan Thanksgiving dinner can be just as good – if not better – than a traditional turkey-centric spread.

Here are my favorite vegan appetizer ideas that will set the bar high for the rest of your vegan Thanksgiving dinner.

(Pro-tip: these can double as some truly amazing side dishes.) Recipe and image from Well and Full.

I can probably eat hummus with every meal of the day, it’s THAT good. Creamy, savory, and oh-so-good-for-you.

This first vegan Thanksgiving idea is an autumn-inspired take on everyone’s favorite dip. It isn’t just vegan, it’s also delicious and easy to whip up on a busy day of Thanksgiving prep.

It’s a unique take on the chickpea-based dip thanks to the addition of roasted carrots, rosemary, and pomegranate-seed garnishes.

The result is a smooth and creamy, colorful dip with subtle spices, a warm smokiness, and a hint of lemon to bring all the flavors to life.

If you’re in a rush, just empty a bag of vegan pita chips on a plate and you’ll be good to go. But if you’re feeling ambitious, roasted vegetables pair excellently with this sweet-and-savory hummus (I especially recommend cauliflower or broccolini).

Get the recipe here Recipe and image from My Darling Vegan.

No Thanksgiving is complete without Brussel sprouts, and luckily for you, it’s super simple to craft a vegan-friendly dish with them.

Sure you could just roast your sprouts in the oven with a little olive oil and salt-and-pepper.

OR, you could turn it up a notch for your vegan Thanksgiving meal.

This vegan appetizer (or side dish) recipe will elevate your brussel-sprout game thanks to the addition of rosemary and hazelnuts, as well as a sweetly acidic maple-balsamic glaze.

To make it appetizer-worthy, serve toothpicks on the side. Recipe and image from Happy Kitchen.

There’s nothing quite like some arugula to create a nutty, peppery Thanksgiving salad.

But this recipe also incorporates spiralized sweet potatoes, chickpeas, and avocado for added flavor and texture, and pomegranate seeds for a colorful sweetness.

This particular recipe doesn’t call for dressing because it’s quite flavorful on its own. Instead it’s recommended to squeeze a little lemon juice to add some brightness. You can very easily pair this with a simple olive oil and vinegar dressing if you so choose. Recipe and image from CookingLight

These mini and retro party treats are perfect appetizers if you are looking for easy vegan Thanksgiving recipes.

This is a relatively simple recipe that will provide you with a mouthful of joy and yumminess. The puff pastries are low maintenance and can be stored in the fridge overnight or left out for a couple hours till they are soft and ready to eat.

The Sun-Dried Tomato Palmiers are great little canapes that can be piled high and served with ease. Recipe and image from Cheftographer

Stuffed mushrooms are the perfect addition to your vegan Thanksgiving meal, and very classy to boot. These bite-size mushrooms are packed full of juicy tomatoes, garlic, vegan cream cheese and fresh basil.

You will often find stuffed mushrooms hidden behind other treats but they deserved to be upfront and in the spotlight. A few of these will get your appetite going and compliment any vegan Thanksgiving dinner.

Feel free to experiment with your mushroom stuffings and don’t be afraid to pair these appetizers with a nice white wine! Recipe and image from MinimalistBaker

These crunchy and sweet snacks will provide your guests with a great handful before the festivities start. Preparing this vegan appetizer is quick and easy. A healthy selection of pecans and walnuts will bake in 12 to 15 minutes and can be warming your bowls in no time.

A drizzle of oil and syrup and a pinch of cayenne pepper to add some heat will ensure that your spiced candied nuts are a hit on Thanksgiving.

This one is more than just a vegan Thanksgiving menu idea⁠—it can be a year-round snack. Now, many people may groan at the idea of a Turkey-less Thanksgiving.

But honestly, even some meat-eaters nowadays are opting to skip the turkey simply because it’s such a pain to cook.

So, convincing your friends and family to omit the bird may not be as daunting a task as it seems – especially with vegan Thanksgiving menu ideas like these. We love the idea of having a giant head of cauliflower as the centerpiece for your Thanksgiving meal. Plus, if you get a big enough one, it almost resembles the shape of a turkey!

The cauliflower only takes about 15 minutes to prep and an hour and a half to cook. Cauliflower takes spices very well and, when roasted, produces a delicious, hearty dish. And, the additional roasted potatoes and carrots make for a hearty vegan Thanksgiving entree idea.

There’s even an inventive vegan gravy to drizzle on top to add extra flavor!

(P.S. You can double or triple the gravy recipe if you’re the kind of person who likes your whole plate to be covered in gravy!)

Get the vegan Thanksgiving recipe here Recipe and image from Connoisseurus Veg.

Another vegan Thanksgiving idea is to make a classic veggie loaf for your main entree. This meatless veggie “meatloaf” will be the star of your show.

Packed with chickpeas, celery, and carrots, this dish will fill you up just as much as any meat-based dish. It’s also loaded with spices and is served with a flavorful maple glaze for extra flavor.

But best of all, this recipe is easily customizable. You can add your favorite nuts, dried fruit, rice or mushrooms to really make it feel like your own signature vegan Thanksgiving dish. Add the flavors of Fall for a mouth-watering and memorable entree.

Recipe and image from Delish Knowledge.

Now, most of us maybe think of stuffing as more of a side dish on Thanksgiving, but we’re breaking that stereotype.

Many stuffing recipes are packed with enough ingredients and protein to be a meal on their own anyway. (And let’s be honest – most Thanksgiving dinners actually have three to five different entrees!)

This particular recipe has a truly home-cooked feel with delicious sourdough bread, warm spices, and a rich “buttery” taste. And instead of using a traditional Italian sausage, this recipe guides you through creating an equally tasty tempeh substitute.

Recipe and image from Happy Kitchen

This comfortably filling and delicious casserole is a delightful vegan recipe for Thanksgiving. In the fall a hearty meal is important to keep your warm and satiated.

A combination of black beans, kale, buckwheat and roasted garlic sauce turns this casserole in to a delightfully scrumptious dish. It is simple to prepare and wonderful to eat! Recipe and image from thespruceeats

A healthy and refreshing meal can be hard to find on Thanksgiving. Often the holiday period is a time to binge on sweet and salty dishes full of dairy and fat. But it is important to offer some variety.

This vegan barley, wild rice, and cranberry pilaf is a nutritious treat flavored with orange juice and fresh parsley. Recipe and image from CookingLight

A fun and eye-catching entree packed full of flavour that will keep you happy throughout the Autumn season. Half an acorn squash drizzled with pomegranate molasses will be plenty for each guest round the table.

It takes some preparation but the vegan Thanksgiving recipe is simple and easy to follow.

Last, but not least, are the autumnal pies, cakes, and sweets that can make or break a Thanksgiving dinner for some people.

So if you’ve been searching for vegan Thanksgiving menu ideas that fall in the dessert category – look no further. Recipe and image from Food Network.

Are you salivating yet? Because I am.

This apple spice cake is not only an insanely yummy vegan Thanksgiving dessert but also surprisingly quick to make.

It’s the perfect combination of pretty much every autumn spice you can think of, and the maple frosting adds a subtle sweetness that doesn’t overpower the rest of the cake.

The pecans also add a little crunch to the exterior, and we have a hunch you could probably get away with adding some to the batter if you’re a big pecan fan. Recipe and image from The Travelling Oven.

(And besides, I wanted to add some chocolate to my list of vegan Thanksgiving menu ideas!)

This cherry-packed cake is one of those recipes that would make an omnivore’s jaw drop if they found out it’s vegan.

It’s seriously decadent, but the tart cherries cut through some of that richness for a well-balanced dessert.

Get the vegan dessert recipe here

Recipe and video from Loving It Vegan.

Were you scared for a minute? Did you think I wasn’t going to include a vegan-friendly pumpkin pie recipe?

Don’t worry – we’d never do that to you.

This vegan pumpkin pie gives the traditional ones a run for their money. The coconut cream makes a perfect substitute for sweetened condensed milk and eggs, and the maple syrup (or date honey, depending on which one you use) adds the perfect amount of sweetness.

You can make your own vegan pie crust or opt for a store bought one. Either way – it’ll be delicious.

And if you’re craving a whipped topping for your pie, this recipe also links to a vegan coconut whipped cream! Thanksgiving for me does not exist without the glorious leftovers being used for sandwiches later in the evening or for lunch the next day.

I think about these sandwiches year-round, in fact.

The best recipe I have found for vegan Thanksgiving meal leftovers in sandwich form is from Purple Carrot (and P.S. you can make it any time of year).

Is your mouth watering yet?

Although the directions will help you craft the sandwich from scratch, you can also use your vegan Thanksgiving leftovers to assemble it.

That’s exactly what your guests will say if you give some of these vegan Thanksgiving menu ideas a try.

Planning a vegan Thanksgiving dinner that is also delicious really isn’t so farfetched. The recipes listed here are just a fraction of the options out there for vegan eaters.

And, some of the dishes your family has always cooked might be vegan – and you didn’t even realize!

So don’t freak out this Thanksgiving.

In fact, you should rejoice. At least you don’t have to deal with cooking a giant turkey!

Let us know in the comments!

Previous Post: « Is Veganism A Diet Or A Lifestyle? The Small Differences In Each
Next Post: 5 Daily Vegan Supplements You May Need In Your Diet » 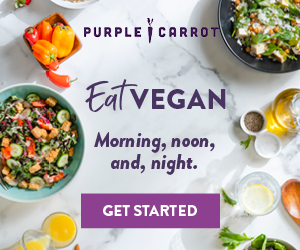